In the scope of a preparation work for a project proposal, a literature research was conducted on the applications of FactSage in the areas of combustion and gasification of fossil and renewable carbon-containing raw materials. The research included not only the important coal- and biomass-based fuels, but also all kinds of carbon-containing industrial and domestic residuals and rejects. Only peer-reviewed publications were considered. Figure 1 shows the time evolution of the number of scientific publications in this area since 2004, 3 years after the release year of FactSage, 2001. 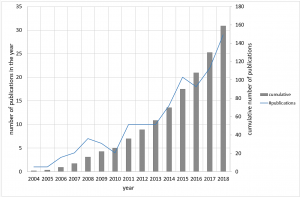 One notices that in this most relevant area of energy generation and conversion, the usage of FactSage as a research tool follows a growth tendency probably related to the growth of research in the area itself. Not only the cumulative number of publications has increased steadily over the years, but also the number of publications per year shows an increasing tendency.