Harvey and Gheribi[1] developed a thermochemistry-based model for the iron blast furnace. In their work, the corresponding process model was developed with a flowsheeting approach based on the connected local equilibrium reactors method, which was implemented using SimuSage, one of the very successful members the GTT’s product family.

The model was constructed based on the following main premises:

In addition to this, the authors developed a tool to manage the thermodynamic properties of each stream and reactor during the simulation. A numerical method for exploring and optimizing the input streams in order to solve the heat and mass balances and also to simultaneously satisfy all the requirements of the blast furnace was also developed by the authors.

A schematic representation of the flowsheet model is presented on Figure 1. 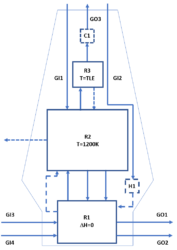 The furnace was modelled basically as a counter-current reactor divided in 5 local equilibrium process units. Unit R1 is an adiabatic equilibrium reactor, corresponding to the lower part of the furnace. Unit R2 is an isothermal equilibrium reactor, corresponding to the upper part of the furnace. Unit R3 is a virtual equilibrium reactor, simulating the cooling of the exhaust gas by contact with the cold iron ore that settles down. Units H1 and C1 are reactors used to respectively virtually heat the coke and virtually cool the exhaust gas. H1 and C1 are adjusted in order that the model satisfies the heat balance condition. The main inputs of the model are represented by the streams GI1, which contains the iron ore and the fluxes, GI2, which contains the coke, GI3, which contains O2-enriched air and GI4, which contains the auxiliary fuel. The main outputs of the model are the streams GO1, representing the slag, which may be partially solid, GO2, representing the pig iron and GO3, representing the cooled exhaust gas. More details about the model can be found in [1].

As a highlight of the paper, the authors developed a model for the Gibbs Energy of metallurgical coke by considering that it consists basically of amorphous carbon. This allowed for an improvement of the thermodynamic description of the system. Of the several results obtained in this work that compared well with literature data, we highlight in Figure 2 the dependence of the slag basicity on the tapping temperature. 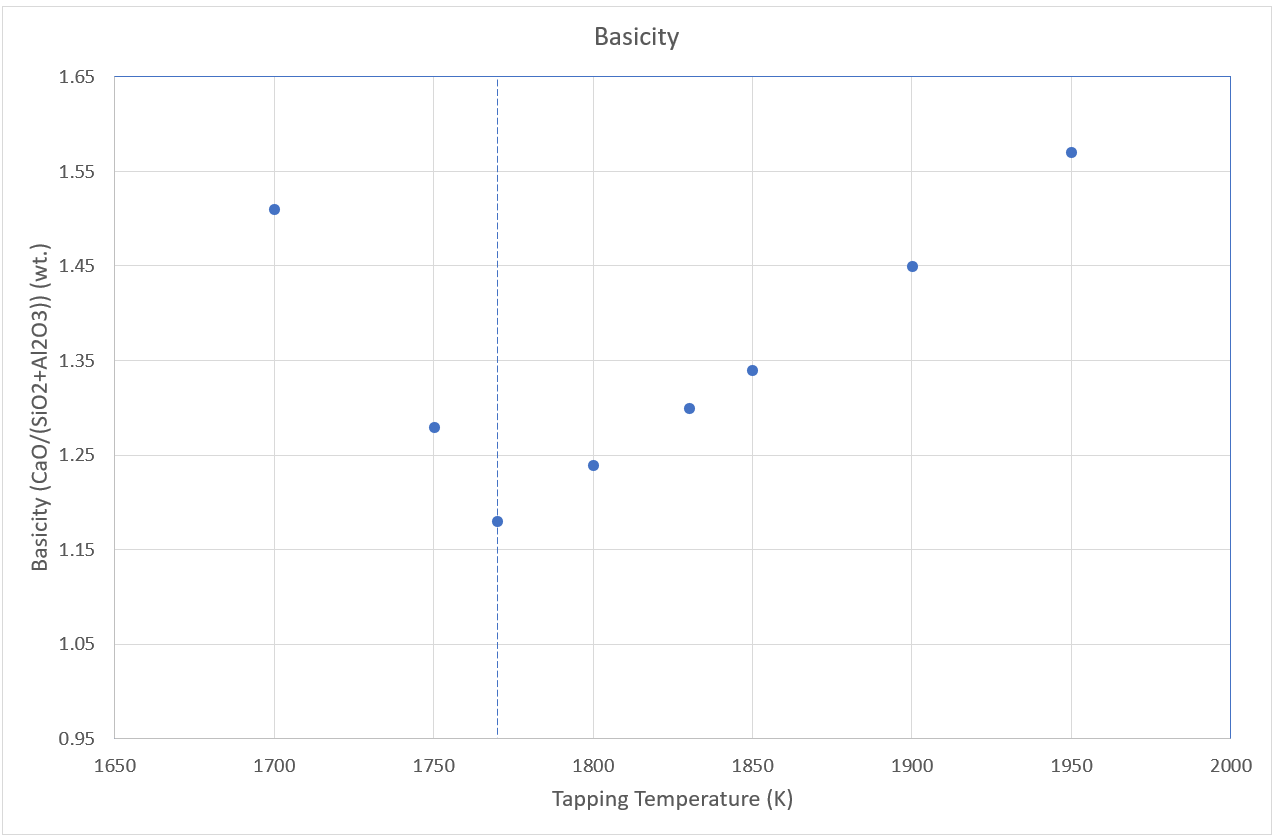